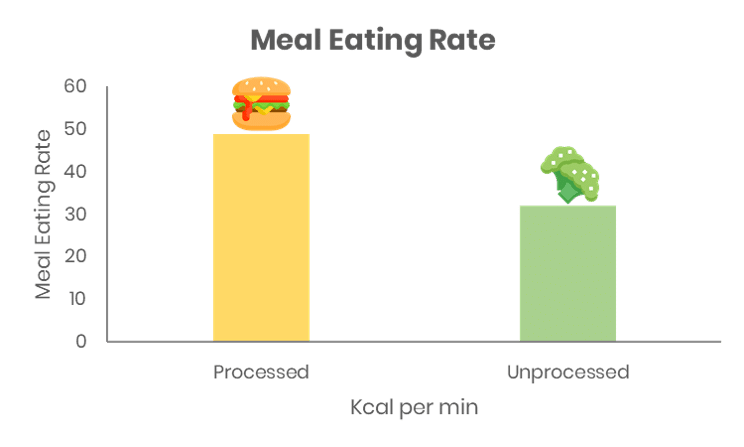 Too lazy to read? There’s an infograph at the end of this article!

Ultra-processed food like donuts, chips and burgers tend to be diet-hurting. Ads use words like “Say goodbye to your diet!” when they promote a new processed dish, often calorie heavy like a heavily frosted cake, and with good reason. It doesn’t help that ultra-processed food are often cheaper, tastier, and more convenient to purchase, making it the more attractive choice.

While every diet in the world may while one way or the other be disadvantageous in its own method, they often have one common factor: Choose as much whole food as possible!

A recent paper by Professor Kevin Hall and his team addressed the issue by having 10 males and 10 females come together to enjoy either an unprocessed or ultra-processed diet for two weeks, and then have the alternate for another two weeks. During each diet phase, the individuals were given three daily meals and were instructed to consume as much or as little as desired.

It is also interesting to note that most of the increased calories consumed by individuals was from carbohydrates and fats, while protein remained unchanged.

It was noted in the study that meal eating rate was significantly faster during the ultra-processed diet compared to the unprocessed diet. According to the research paper, previous studies have shown that a 20% change in eating rate can affect food consumption by 10-13%, which would directly contribute to the number of calories you put into your body.

An explanation behind why individuals seem to eat faster during the ultra-processed diet was because food was generally softer, and therefore easier to chew. The increased in eating rate therefore allowed more food to enter the body, and the body might not have registered that it is being fed, thus causing more food to enter.

The appetite-suppressing hormone PYY increased and hunger hormone ghrelin decreased during the unprocessed diet as compared with both the ultra-processed diet and baseline.

This meant that during the ultra-processed diet, there is a higher potential that the body had a higher appetite level and felt hungrier compared to when it was being fed an unprocessed diet. The result of this might have caused an increase in how often and how much we decide to eat.

Does this mean that we should stop eating ultra-processed food altogether?

Yes, and no. While it is possible for some to do so, others may feel a sense of deprivation when they do not get to eat their favorite food. What seems bad for the body may after all, be good for the brain. If you intend to enjoy a serving of your favorite cake after this, just be mindful about what you’re putting into your body and consider the effects. This way, you can practice mindfulness while enjoying some of your favorite things in life. Double win!

Here’s an infograph to help you grab the main points of the study!

Need new ideas to cook? Click here to check out this Fried Rice Recipe! A cheat sheet is included to give you more varieties!

Want to lose weight and get in shape without all the marketing fluff and nutrition “noise”? Learn how you can lose weight safely and mindfully through proven and sustainable sports nutrition today.

Book an Appointment with James Get your initial nutrition consultation here.